“Our city is at the flood tide of opportunity and if our citizenship will now all pull together under intelligent leadership, we will build a much greater city.”

Thus begins a lengthy circular extolling the duties and benefits of a Chamber of Commerce distributed with the January 22nd, 1919, edition of the Cleburne Morning Review.

One day prior, thirteen men appeared before Cleburne notary public Murphy Pickle and signed a petition requesting an official charter for their newly founded Cleburne Chamber of Commerce.

These events had been formally set in motion one month earlier, at a “Get Together Banquet” hosted December 20, 1918, by the Cleburne Commercial Club. Presentations were made on such topics as City Building, How to Get Results, and Benefits of a Commercial Club. Not all were in favor of transitioning from Commercial Club to Chamber of Commerce. Nevertheless, the signed petition was filed with the State of Texas on February 1st, and on February 17, 1919, the charter of the Cleburne Chamber of Commerce was officially approved by the Secretary of State.

Dues were set at $25 per year, per individual, which in 2019 would equal more than $291 each. It’s a testament to that new Chamber’s the overwhelming support that at least ninety-one men signed up right from the start. 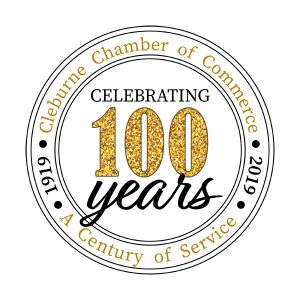 The founding Board of Directors set a goal of $10,000 a year in revenue, but within the first year, the Cleburne Chamber had amassed more than $20,000 and comprised more than 800 men. Founding President John W. Floore, Jr., rightfully boasted that “every heretofore reactionary influence in Cleburne is now united in the new organization and pulling towards the common end of community betterment.”

The Great Depression of the 1930s brought challenges, and other similarly-sized Chambers faltered. But the Cleburne Chamber of Commerce made it through intact, “taking care of all its obligations,” because of sound leadership and strong community support.

In February 1946, the organization became a federally recognized non-profit.

To this day, strong leadership and community support are key to the Chamber’s continued success.